If you have not read “Reply to William Finck, et al, Round Earth Roundtable Discussion, Part I,” you can do so here. In Part I, I went through the podcast quoting Finck’s own words and replied.

Here in Part II, for the sake of time, both yours and mine, I’m just going to pick out a few of the statements made by Finck, and others, and reply to those selected statements only.

The following is only some of the highlights of the recording. The first statements I’ve chosen to comment on in this missive are found about 16 mins in: Finck says “…..somebody (is) here with me to make some more “technical comments to show that we do have mathematics to demonstrate Eric Dubay is a liar.”

“Somebody” goes on, allegedly demonstrating through math, using calculations, how Dubay, (and through implication, all round globe deniers), is lying and deceiving a “whole lot of people on the internet.”

One argument, and take a listen to follow along starting at 16 mins in, looking at a distance of 20 miles as a distance “which is a reasonably good visibility on a, on ah, on on the …. within some days.” “The drop off at the end of the 20 miles would be 267 feet of curvature. And, if we take that 267 feet at the end of that excursion, looking at that, ah, based upon that particular accuracy there, I would have to have a perception in my eyesight of better than .25 percent. That alone is probably pretty ludicrous to assume that at the extent over a 20 mile region if I’m standing in a specific spot, that I would actually be able to detect a curvature at .25 percent and that’s assuming that 267 feet of curvature.”

At this point Finck interjects, “Your eye would have to be as accurate as a laser level.”

Somebody replies, “Yes, that is consistent.”

Are these two really making these “arguments”? This is one of the “technical comments” that demonstrate the mathematics” showing Dubay is a liar?

Somebody just tossed out a logical fallacy known as a red herring. Other names for these bogus arguments are smokescreen, and wild goose chase. The issue under discussion is the curvature of the earth, not the ability of the human eye to accurately detect the earth’s alleged curvature at 20 miles distance.

The naked eye can be aided by binoculars and telescopes camera lenses. They can and do detect curvature or more accurately, the lack of curvature, in the earth’s surface at 20 miles and further, much further.

Finck provided the answer himself: “Your eye would have to be as accurate as a laser level.”

Yes, indeed. Here’s a video of a young fellow and his wife that got off their asses and actually went out to test the hypothesis that the earth has curvature. Flat Earth vs. The Globe Laser Test Flat Earth Experiment – Hypothesis

Somebody goes on to use the assumed radius of the round earth as 4000 miles, in another of his calculations to “prove” round earth deniers wrong.

The issue under discussion is whether the earth is round, like a ball or a level circle.

One can’t take for granted assumptions held by one view, in this case, a round earth with a radius of 4000 miles, to be used as evidence to prove anything. The “argument” is another logical fallacy – Circular Reasoning.

Somebody also assumes gravity is the answer.

Somebody then goes on to use a reference to the center of the earth again, once again assuming the earth is round. He also uses the assumption the earth’s center is the center of gravity of the earth, ignoring the fact that gravity is a theory, not proven fact. Finck can be heard in the background mocking gravity deniers, saying those who deny the theory of gravity should try jumping off a bridge.

Density answers many of the questions that usually get answered by the easy answer of “gravity.” The reason a person lands in the river below when jumping off a bridge is just as easily explained as the person’s body is denser than the air, so it falls through the air.

I would have thought that Hollywood making a propaganda movie titled, “Gravity” would have been a head’s up for someone as awake to the jew as Finck. 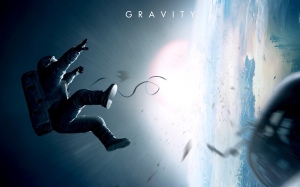 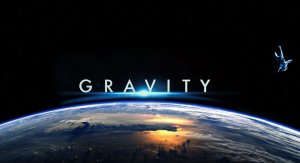 The jews in the above video discuss the role jews played in getting Copernican thought accepted.

At 39:40 – 40:18 we hear: “This division has always been with us – whether the earth was a sphere or flat. You can’t take a couple lines from the Bible and insist the world is flat. None of the verses insist the Earth – when you look at the Hebrew – that the Earth is flat. And to say it is … you know, these clowns like Don Spears they think Jesus came down at West Minister Abbey in 1611 and gave men the Bible in English. So, whatever the King James says, that is dogma or doctrine. And, and the Hebrew and the Greek doesn’t support any of that. It does not insist on a flat Earth, it’s crazy.”

From my readings and listening to several if not dozens of posts and video podcasts related to the topic of the shape of the earth, I have not run across any “clowns” insisting from a few lines or verses of Scripture that the earth is flat. However, I have run across several verses that, if taken literally, essentially require the Earth be flat / level.

From The Flat Earth Bible, we find these verses:
“In Daniel 4:10-11: the king “saw a tree of great height at the centre of the earth…reaching with its top to the sky and visible to the earth’s farthest bounds.” If the earth were flat, a sufficiently tall tree would be visible to “the earth’s farthest bounds,” but this is impossible on a spherical earth. Likewise, in describing the temptation of Jesus by Satan, Matthew 4:8 says, “Once again, the devil took him to a very high mountain, and showed him all the kingdoms of the world [cosmos] in their glory.” Obviously, this would be possible only if the earth were flat. The same is true of Revelation 1:7: “Behold, he is coming with the clouds! Every eye shall see him…”

Here is an comprehensive article discussing Scripture and the flat earth model.

Taken alone, these verses are not “proof” the Earth is flat. However, wouldn’t they provide the objective student studying the subject at least cause for pause?

With this, “these clowns, like Don Spears, they think Jesus came down at West Minister Abbey in 1611 and gave men the Bible in English. So, whatever the King James says, that is dogma or doctrine,” Finck uses a straw man argument.

Other participants, along with Finck, continue their discussion coming to the conclusion that if someone is a jew, everything they say should be disregarded, because it can not be ascertained whether or not they are telling the truth, “about this or that.”

Whether or not a person is telling the truth, whether he is a jew or not, can often be ascertained by one doing his own research on the subject matter and not relying solely on what that person says. If we follow this logic, should we totally disregard Benjamin Freeman’s Willard Hotel speech, because he was a jew, revealing, for the first time, behind the scenes events involving WWI, the blackmailing of Woodrow Wilson and the US entry into WWI?; or the jew Samuel Untermeyer’s involvement in the appointment of the first Jew to the US Supreme Court, Louis Brandeis? And his involvement in the funding of the deceptive Scofield Reference Bible?

Further, Freedman provided information that was unknown to most before he “defected.” Should I throw out his book, “Facts Are Facts,” which I have quoted from to show skeptics the truth of many of the arguments I have made? Isn’t it more convincing to quote straight from the viper’s mouth facts that they may find impossible to believe unless they are spoken by a Jew?

Same thing applies to Bobby Fisher, a jew, who many consider a very intelligent man. “I equate the Jew and the devil together. To me, they are practically interchangeable.” Bobby Fischer on the Jews.”

Just because a jew supports subject, such as a non-spherical, non-spinning Earth, doesn’t mean the Earth is a spinning globe rotating around the sun.

Another straw man argument is brought up, that is, “how can anyone in Christian Identity follow someone who has a chink for a woman?” referring to Dubay. Who said anyone was “following” Dubay?

Can’t Finck and his following come up with non-strawmen logical fallacy arguments?

As for Don Spears “entertaining” “the jew Mark Sargent,” did it ever occur to any of these non-spherical Earth bashers, that perhaps Spears was unaware that Mark Sargent was a jew, a fact that has yet to be established? After all, Finck himself said that Spears has bad eyesight and because of this could not do his own podcast. Aren’t we as Christians, supposed to give our Christian Identity brethren the benefit of doubt? Has anyone asked Don Spears if he knew Sargent was a jew?

Maybe it is Finck himself who is the jew?
Is William Finck a Jew? Yes, by his own words, he is Jew.

Mike Delaney goes on about volunteering to fly down to the Antarctica and “talk to the man on the other side of the Petri dish,” another straw man argument. No Christian Identist I am aware of believes the Earth is a Petri dish. I certainly don’t.

Delaney also volunteers to “take photographs.”
Mike, how will you know for sure where you’ve landed? Think about it; you’re going to land on some rocky island somewhere with penguins and ice and sea water as far as the eye can see; how will you know where you are? 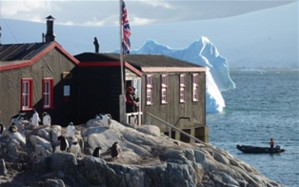 How will know for a certainty that you are where you are told you are? How can you verify that info?

Finck: “These flat-earthers pontificate about these stupid points they make on the internet endlessly and none of them have gotten off their asses and gone and taken some pictures. ” …… I want pictures of the ice wall.”

Well, here are some pictures of the Ice Wall. Unlike NASA photos, these images do not appear to have been computer generated or Photoshopped. They are the real thing. 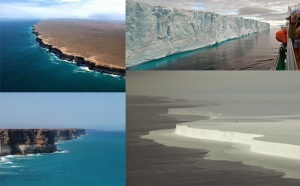 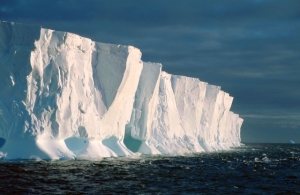 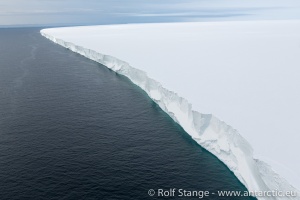 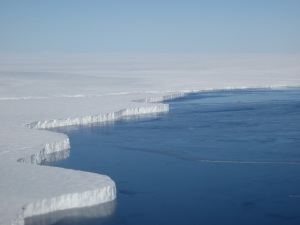 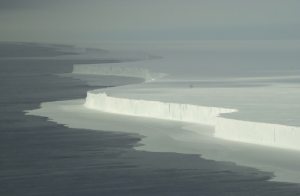 Why can’t that Ice Wall be on the outer rim of a flat Earth? 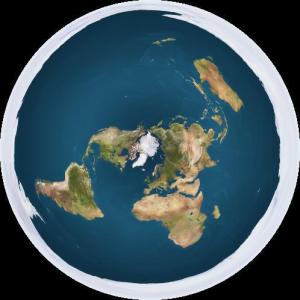 The answer is of course it can.
It became increasingly more difficult and painful to continue listening as I played and rewound the podcast over and over to make sure I got the quotes accurate.

If I was Finck, I don’t think I’d be calling others clowns.

I’ll finish up with this quote attributed to Aristotle — ‘It is the mark of an educated mind to be able to entertain a thought without accepting it.’

For more on the subject of the firmament and the deception as found in the Scofield Reference bible, see Flat Earth Dr. Hugh Ross Avoids the Firmament of Genesis 1.

This entry was posted in Uncategorized. Bookmark the permalink.